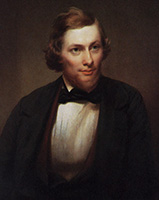 Jasper Francis Cropsey was born February 18, 1823, on his father's farm in Rossville, Staten Island, New York. He was the eldest of eight children in a family descended from Dutch and French Huguenot immigrants.  In 1837, at the age of fourteen, Cropsey won a diploma at the Mechanics Institute Fair of the City of New York for a model house that he built. That same year he

was apprenticed to the architect Joseph Trench for a five year period. After eighteen months, Cropsey, who had shown an early proficiency in drawing, found himself responsible for nearly all of the office's finished renderings. Impressed with his talents, his employer provided him with paints, canvas, and a space in which to study and perfect his artistic skills. During this period Cropsey took lessons in watercolor from an Englishman, Edward Maury, and was encouraged and advised by American genre painters William T. Ranney (1813-1857) and William Sidney Mount (1807-1868). It was in 1843 that Cropsey first exhibited a painting at the National Academy of Design, a landscape titled Italian Composition, probably based on a print, which was quite well received. He was elected an associate member of that institution the following year and a full member in 1851.
After leaving Trench's office in 1842 and while supporting himself by taking commissions for architectural designs, Cropsey had begun to make landscape studies from nature. A two-week sketching trip to New Jersey resulted in two paintings of Greenwood Lake that were shown at the American Art Union in 1843. It was during one of his several subsequent trips to Greenwood Lake that the artist met Maria Cooley, to whom he was married in May 1847. The couple left for an extensive European tour immediately thereafter. After traveling in Britain for the summer, the Cropseys spent the next year among the colony of American artists settled in Rome.
Upon his return to the United States in 1849, Cropsey first visited the White Mountains and later took a studio in New York City from which he traveled in the summers through New York State, Vermont, and New Hampshire. When sales of his works were low, as they sometimes were in these early days, he would teach to supplement his income. The only one of his pupils to gain substantial recognition, however, was the landscape painter David Johnson (1827-1908).
In June 1856 Cropsey and his wife sailed for England for the second time and soon thereafter settled into a studio at Kensington Gate in London. There the couple established an active social life, counting among their friends John Ruskin, Lord Lyndhurst, and Sir Charles Eastlake. Cropsey executed commissions for pictures of English landmarks for patrons in the United States, and painted scenes of America for a British audience. In museums and galleries he was exposed to the naturalistic landscapes of John Constable and the Romantic paintings of J.M.W. Turner. At this time he also explored and recorded the Dorset Coast and the Isle of Wight.
Cropsey returned to America in 1863 and shortly thereafter visited Gettysburg to record the battlefield's topography in a painting. He began to accept architectural commissions once again and produced his best known design, the ornate cast and wrought iron "Queen Anne" style passenger stations (begun 1876) of the Gilbert Elevated Railway along New York's Sixth Avenue. For himself, beginning in 1866, Cropsey built a twenty-nine room mansion in Warwick, New York. He was forced to sell this home in 1884 but was able to purchase a house at Hastings-on-Hudson, New York, to which he added a handsome studio. Today the site, called Ever Rest, is maintained as a museum by the Newington-Cropsey Foundation.
For fifteen years Cropsey continued to paint in his home on the Hudson. Although he exhibited regularly at the National Academy of Design, his realistic, meticulously detailed, and dramatically composed scenes were eclipsed in popularity by the smaller-scale, softer, mood-evoking landscapes of Barbizon inspired painters such as George Inness (1825-1894). After suffering a stroke in 1893 Cropsey, a founder of the American Society of Painters in Watercolor (later the American Watercolor Society), turned increasingly to this medium, painting both in watercolor and oil until his death in Hastings-on-Hudson on June 22, 1900.