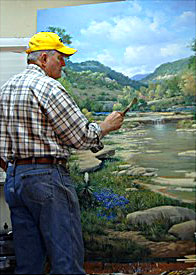 George Kovach began his career in his hometown of Miami, Fla. Where he worked for an advertising agency. Though George enjoyed his work with the ad agency, he realized that his true love was fine art. However, it would be almost ten years before he took the plunge and became a full time artist.

George grew up admiring and studying the techniques of the Hudson River Artist. He studied and graduated from the Miami Art Institute. While there George began to express and develop his own natural talent in painting. Shortly afterward, George made Texas his adopted home, and after painting a thousand miles of country roads, windmills, oil derricks, oak trees, millions of blue bonnets and Indian Paint Brush, Kovach paintings now speak for themselves. George has always said that tenacity and determination are best friends to one's talent.

Though the well-known Texas Hill Country has long had a claim on George's pallet, he has also devoted time to depicting home, family and community. His patriotic paintings easily awaken a sense of pride in our freedom and democracy, whether the scene is of a festive display of fireworks or of a family working or playing together.

George has enjoyed many awards and honors. From top selling prints and recognition as one of America's artist to "watch" in U.S. Art Magazine, to the most recent "National Guest Artist" for Milwaukee public television.