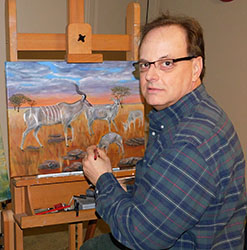 Since middle school, Jon studied art and participated in studio classes each year. He graduated from the University of Missouri in 1987 with a Bachelor of Arts with a minor in studio art. His education included many hours of drawing and painting live models, with special emphasis on Intaglio. Since graduating, Jon produced art on a limited basis, as his primary focus was serving our country. In 2016, after retiring from government service, Jon began pursuing wildlife art on a full time basis. As a life-long outdoorsman, Jon traveled widely across the U.S., as well as to South America, and to Africa; he incorporates his varied experiences into his art.